It was March, 1985, and I was a ten year old kid dealing with the separation and impending divorce of my parents when my grandmother decided to take me along on her seventeen day TWA tour of Europe.  I admit that even to this day when I think of Europe it is always as it was in 1985.  While I had traveled short distances to Disney World and the beach and had flown to places like Atlanta, which was less than an hour flight, I had never been very far from the farm I called home. 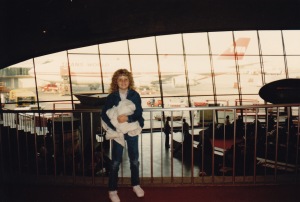 I can remember the excitement of this tomboy at the thought of flying on a big jet, maybe even a 747!  LOL, I know that now when I see a 747 I cringe knowing I am about to be shoehorned into the cattle car, give me a 767 with two seats on the window any day.  It was all so glamorous and exciting to a 10 year old and I am pretty sure it was even comfortable.  So we set off in our TWA L-1011 (not a 747 much to my dismay) to Amsterdam and I was officially hooked!

We visited the Netherlands, England, Switzerland, Germany, France and Italy during those seventeen days, I saw real snow and mountains for the very first time, not to mention history on a scale I could never have imagined.  I can’t actually say if this trip is what gave me my love and appreciation for history but it certainly didn’t hurt.

Oh and to help ease the sadness of the end of the trip, what was waiting at the gate to take us home?  A 747!